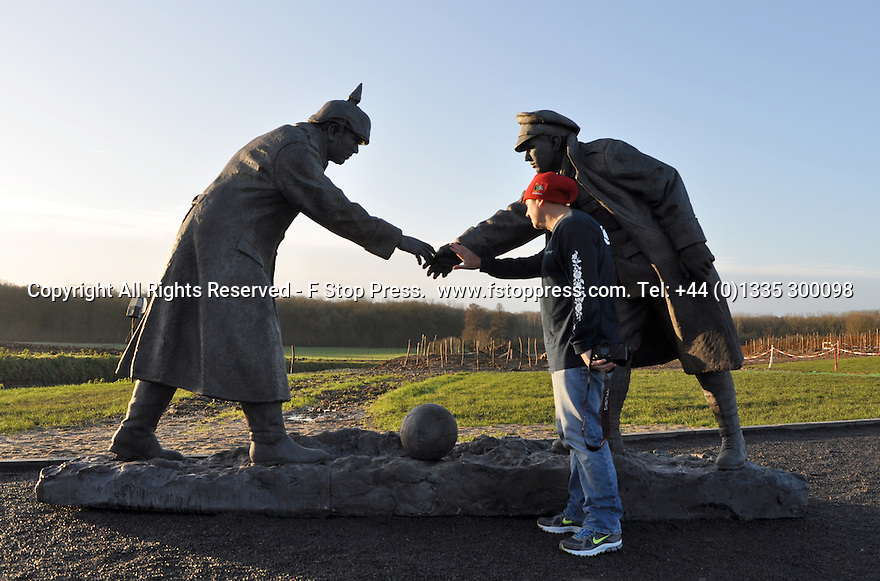 People play football by a sculpture depicting two WW1 soldiers playing football during the famous Christmas Day truce in the field near Messine, Belgium, close to where the match was played in Flanders, Belgium.

The sculpture, made in England, arrived in Flanders on Christmas Eve, and was first displayed in the town centre before being taken to the spot where the match was played.

Sculpted by Andy Edwards the work is entitled ‘All Together Now’, recalling the song by the band The Farm - which was inspired by the truce.

Chris Butler said: “Castle Fine Arts are proud to have cast a number of war memorials over the years. We are honoured to support this sculpture for peace. I believe it will touch the hearts of millions.”


“It will be a symbol of peace and hope and a call for a renewed worldwide cessation of violence in honour of those brave boys who ‘joined together and decided not to fight’”.


The statue depicts the meeting of a British and a German soldier over a football, deep in the mud between the lines on that first Christmas of the war. The soldiers appear to be shaking hands but are not not quite touching, forming a space in which a visitor can insert their own hand to complete the union. A chance for a moments reflection on how far we are from true peace and brotherhood and the part each of us has to play in that dream. We want the work to stand as both a celebration of this inspirational and heroic event and as symbol of hope and peace.

The project was instigated some years ago, with the support of the Football Asscociation (FA), as football’s contribution to the First World War commemorations.