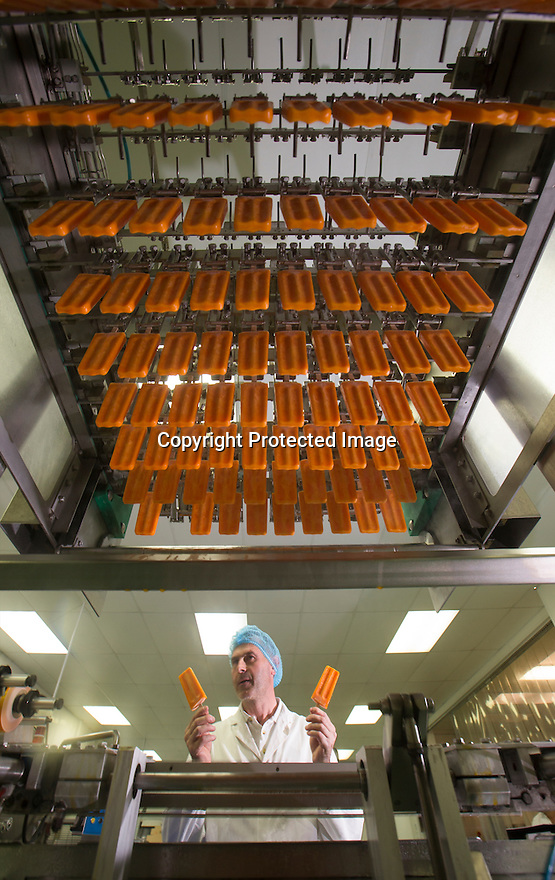 
“The last couple of days have sent the factory into meltdown,” exclaimed Pasquale Tanzarella, director of one of the UK's largest independent ice-lolly manufacturers.

In fact, today alone, his factory will make more than 200,000 ice lollies, which will be sold up and down the country through traditional ice-cream vans and shops.

Demand has been so high because of the recent hot spell that the cold rooms at Franco’s ices, in Kempston, Bedfordshire, are already full to bursting, with more than 40 different varieties of ice-cream and ice-lollies, and today’s production of Tasty Orange lollies will probably be on sale by late afternoon.

The lollies start life in a huge 2,000-litre vat, as a syrupy, bright orange liquid, before being poured into the traditional ice-lolly moulds.

From there they are passed over a fast-freezer, at around -36C, to super cool the liquid into ice, which only takes around 20 minutes, before being loaded into their colourful outer wrapper.

And then it’s straight into wholesale boxes, stored in the factory’s cold rooms, and sold the very same day.

It’s a super success story for this family-run business, which was founded in1964 by Pasquale’s father, Domenico Tanzarella, originally to sell ice-creams through a local chain of vans.

“In the 70s we used to only supply vans within about a 60-mile radius of the factory,” said Pasquale.

“But we’ve grown steadily over the years and now we export to Cyprus, Ireland and even South Africa, as well as being one of the biggest suppliers here in the UK.

“Our best seller by far is the Mr Bubble ice-lolly,” said Pasquale. “We were the very first company to launch a bubble gum flavoured lolly and it’s been our best seller ever since.”