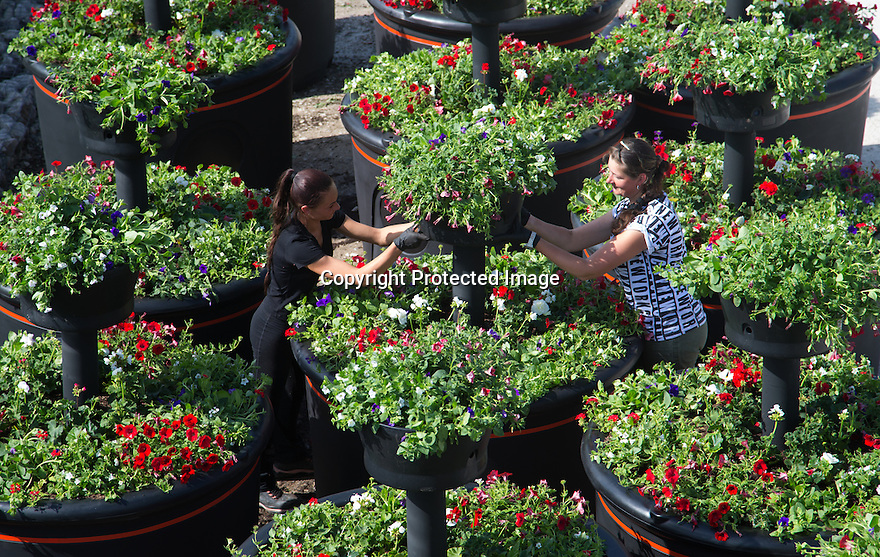 Aurika Baziulyte, 24, and Raminta Mazuraityte, 29, finish-off one of the pots before they are sent to Liverpool.

It's been 'all hands on deck' for a nursery fulfilling a titanic order for 20 giant, four-tiered, planters containing 2,400 red white and blue flowering plants that will arrive on the dockside in Liverpool today to mark the 175th anniversary of Cunard.

Plantscape, in Hulland Ward, Derbyshire only had two week's notice to prepare the order for the planters known as Eye-Full Towers.

Each one will be topped-up with 300 litres of water and will weigh-in at a staggering 850 kg. They will be in position in-time for the arrival of The three Royal Cunard ships known as the 'Three Queens' which are are scheduled to make an historic appearance as a trio in the Mersey for the first time this bank holiday weekend.

The giant planters have all been planted with geraniums, verbenas, surfinias and Trailing Begonias. The huge interlinked plastic containers were moulded specially for this order and three of the nursery's staff have been working tirelessly to get the order completed before all the planters were loaded onto three giant articulated lorries last night.
All Rights Reserved: F Stop Press Ltd. +44(0)1335 418629 www.fstoppress.com.
Rod Kirkpatrick